The students, all psychology majors, had traveled to South Florida with Maria Bulla, an NSU alum who earned a master's degree in Mental Health Counseling. The group visited the NSU Fort Lauderdale/Davie Campus and learn about master’s and doctoral programs. The day’s events opened with breakfast and a welcome message from College of Psychology Dean Karen Grosby. The visitors received tours of several buildings and a shuttle trip to the Rolling Hills graduate residences. 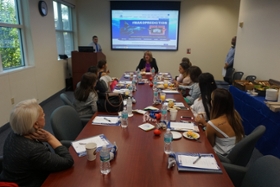 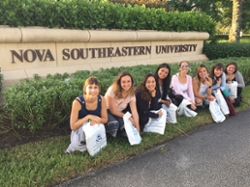 “I was impressed by how attentive and eager they were to learn more and apply behavioral analysis principles to the field,” said Adjunct Professor Manny Gonzalez-Abreu, Ph.D., Clinical Training Coordinator at the Mailman Segal Center for Human Development.

Gonzalez-Abreu switched between English and Spanish while speaking with the tour group. Working in a bilingual context is nothing new for Gonzalez-Abreu, who also teaches at NSU’s Puerto Rico Campus. 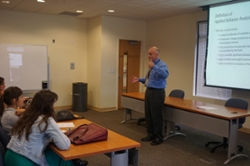 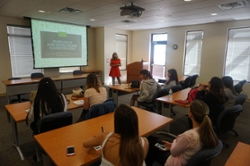 The topic on autism also provided an opportunity to discuss cultural differences in mental health issues, said Assistant Professor Maribel Del Rio-Roberts, Psy.D., of the College of Arts, Humanities, and Social Sciences. Del Rio-Roberts said the group members were not familiar with autism, which could be a result of how mental health is viewed in Hispanic cultures.

“There’s some cultural resistance and reluctance from parents,” she said. “They minimize and want to wait and see how it plays out. But the earlier the intervention, the better the outcome.”

The group showed interested in the topic of identifying the needs in diverse populations.