Faced with the prospect of death, Officer Mario Gutierrez of the Miami-Dade Police Department credited thoughts of his family with saving his life. 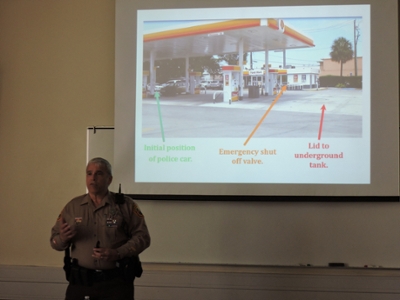 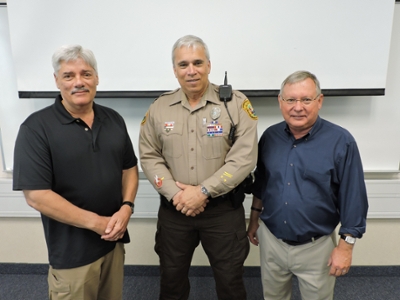 Gutierrez shared the story of his life-threatening encounter with a suspect during a guest presentation at Dr. Vincent Van Hasselt’s Police Psychology Seminar at the College of Psychology. Gutierrez’s story began on Oct. 29, 2013, when he was on patrol near the Miami International Airport. He spotted a 51-year-old homeless man lighting a gas station’s underground gas tank on fire and sprang into action to activate the emergency shut off valve. Gutierrez confronted the suspect and was attacked with a knife and screwdriver. During the brief struggle, the thought of never seeing his family again gave Gutierrez the determination to fight back and use his gun to fatally wound the suspect.

“That’s when I remembered my family, and that he was going to kill me and I was never going to see them again,” said Gutierrez, a 24-year veteran of the department. “I got really angry.”

Gutierrez suffered multiple stab wounds from the two weapons and a deep bite on his thumb, but a fellow officer quickly transported him to Jackson Memorial Hospital for treatment. After a two-month recovery period, Gutierrez returned to duty and still patrols the same area. In May, Gutierrez was one of 13 law enforcement officers awarded a Public Safety Medal of Valor by President Obama at the White House.

During his recovery, Gutierrez said he was open about communicating with his family and a police psychologist regarding his emotional state. That course of action can be uncommon among officers, according to Dr. Van Hasselt.

“Officers may be reluctant to come forward and seek help because of the stigma attached to that and the fear of being perceived as weak,” he said.

The smarter choice, Dr. Van Hasselt said, is to seek help earlier to prevent problems from developing later. Changing the conversation on mental health and a department’s culture depends foremost on the chief’s support, he said. With an increased focus on mental health in the military, Dr. Van Hasselt said that conversation is now broadening to include law enforcement. The issue particularly overlaps when returning veterans enter law enforcement after leaving the military. 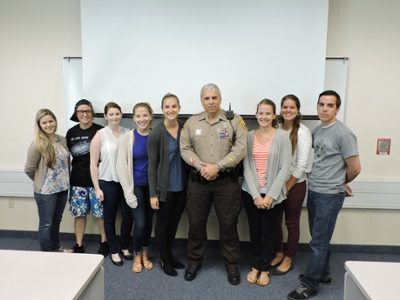 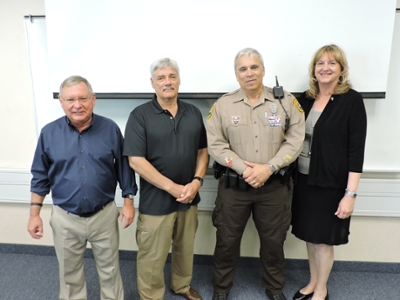 Dr. Van Hasselt’s summer course regularly features guest speakers like Gutierrez who have experienced an unusual encounter or survived a dangerous situation and have insight to share. The guest lectures target Forensic Psychology students who may in the future work as police psychologists.

“It helps show that psychology has much to offer to law enforcement,” he said.