The College of Psychology’s Psychology Services Center inside the Maxwell Maltz Building features new toys in its playrooms thanks to the fundraising efforts of graduate students. 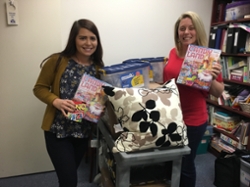 “We are appreciative of their efforts,” said Yukari Tomozawa, Psy.D., the coordinator for Child, Adolescent, and Family Services in the PSC.

The new items include toy cars and board games like Candy Land. Tomozawa said the toys play an important role in engaging child clients into therapy.

“Kids express themselves through play,” Tomozawa said. “It helps them talk about their feelings and what’s going on.”