A group of 40 high school students from North Lauderdale’s Somerset Academy got hands-on neuroscience experience at the College of Psychology’s Parker Building labs during a Wednesday, June 1 trip to the Fort Lauderdale / Davie campus.

The students conducted their experiments using inexpensive equipment from Backyard Brains, which has been featured in a TED talk. In one experiment with the Neuron SpikerBox, students connected a cockroach leg to the box and played music on their smartphones to move the leg. The experiment demonstrated how the neurons and muscles in the leg could be stimulated with the impulses from the music. 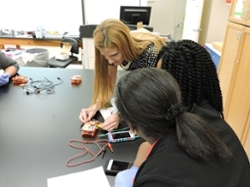 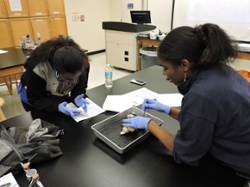 Students also worked with Dr. Munoz on an anatomical experiment by dissecting a sheep brain and cow eye. The anatomy exercise connects to what students are learning in the classroom, said AP psychology teacher Cassandra Johnson. “They’re learning new things and applying their textbook knowledge to the lab experiment.”

The group received a lunchtime visit from Dean Karen Grosby, who chatted with some students about their educational interests. After lunch, students had the opportunity to volunteer for the Human-Human-Interface, another Backyard Brains experiment kit. With two volunteers hooked up to the interface box, electrical signals sent from the brain to move a muscle were recorded and sent to the second volunteer. When the first volunteer moved their arm, the signal would cause the second volunteer’s arm to involuntarily make the same movement. 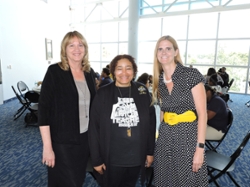 The field trip offered a taste of the activities in the college’s 2016 Behavioral Neuroscience Summer Camp, which runs July 11-22. Although space is already filled for the 2016 camp, Dr. Tartar encouraged the Somerset students to consider registering for the 2017 camp.