Twenty four high-schoolers embarked on a two-week journey of dissections, experiments, and research as part of the NSU College of Psychology’s Behavioral Neuroscience Summer Training Program.

The first day’s activities in the Parker Science Building opened with an introduction and background lecture by Tartar and Munoz, followed by the first hands-on activity: dissecting a sheep brain.

“It’s usually their first time getting into it and learning about the structure of the brain and how it leads to behavior,” Munoz said. 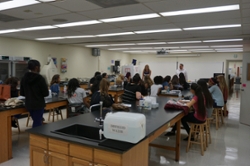 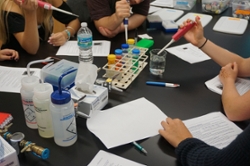 On day two, students received a lecture on neuropathology that was followed by lab work in immunostaining neurons. As part of the lab, participants learned about how to properly use a micropipette, which Munoz said is the tool most often used by scientists. Students used colored water during the exercise to learn how to properly transfer the right amount of liquid.

Day three focused on action potentials and experiments with manipulating severed cockroach legs with sound. They also tested a human-human interface in which one person hooked up to a device had their arm moved involuntarily by the other person sending electrical signals. The day’s second half focused on vision and featured the dissection of a cow eye.

Day four’s activities included a biofeedback lecture and lab in the Maxwell Maltz Building, led by Professor Jeffrey Kibler, Ph.D. Students examined stressors during therapy, with some volunteering to be hooked up and have their breathing and pulse measured by BioTrace software.

“They were very active from the beginning and had lots of great questions,” Kibler said. “If I had another hour or two, they would’ve been there the whole time.” 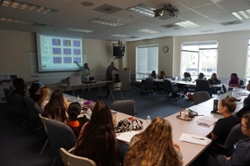 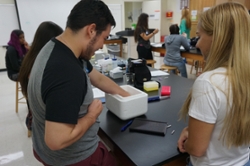 The first week wrapped up with a lecture on hormones and behavior, followed by an alpha amylase lab. Students measured their saliva before and after a stress activity, which involved dunking a hand in a container of ice water for at least a minute.

Week two started with a computational neuroscience lecture and lab with Assistant Professor Travis Craddock, Ph.D. Students used computers to learn about the Hodgkin-Huxley mathematical model that describes how action potentials in neurons are initiated and propagated. They then programmed biophysics equations to predict how neurons resisted incoming signals.

“For high school this is very advanced, and even for undergrads,” Craddock said. “It’s good to expose them early so they pick up some information and pique their interest for future research.”

Day seven marked the end of group lectures and labs with receptor binding and a DNA necklace activity. As part of the activity, students drank Gatorade and then spat into a cup to extract DNA from cheek cells. After extraction, the DNA was transferred to a plastic microcentrifuge and fashioned into a necklace. 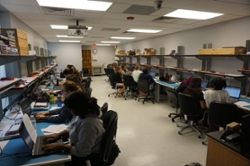 For the last three days of camp, students worked individually and in groups on their discovery-based labs projects, culminating in a lunch reception for the students and their families. With their projects mounted on poster boards, students explained their work to each other and to family members.

Kelly Medina, 17, was part of a group whose project examined the “Role of Blood Vessels in Neurogenic Stem Cell Proliferation.” She said she expected the camp to be more regulated and was surprised by its free flowing nature and hands-on exercises. Medina said the camp had an effect on her college plans, which include studying oncology.

“I was more focused on the clinical side, but this made me consider doing research more,” Medina said.

Andrew Singer and Ally Lowitz, both 17 and of the NSU University School, worked on a project entitled “The Relationship between a 5HTR2A Functional Single Nucleotide Polymorphism and Emotional Health,” which examined the effect of serotonin on mood. Both enjoyed the camp’s focus on hands-on activities.

“We discovered things by ourselves,” Singer said.

“I love neuroscience. I never thought I’d enjoy working in a lab, but this has opened doors,” Lowitz said.

Kennedy Cadichon and Gaby Malak, both 16 and from West Broward High School in Pembroke Pines, said they enjoyed the mix of lectures and lab activities. Their group project was “Do Your Taste Receptors Influence the Flavor of Your Food?”

“I thought there would be more textbooks and that we would be told to observe and not touch anything,” Malak said. 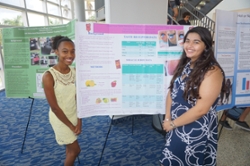 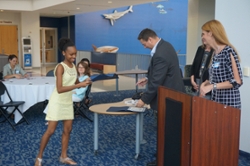 The lunch reception also included the awarding of certificates and a welcome message from College of Psychology Dean Karen Grosby, Ed.D.

“They’re so motivated and bright,” Grosby said. “They are the future, and they’re exactly what employers are looking for.”

Tartar was pleased with the program’s outcomes.

“We were fortunate to have an amazing group of students,” she said. “The students were full of energy and enthusiastic about learning- we felt reinvigorated by them and it was thrilling to see them carry out their discovery based projects- within two weeks they went from concept, to experimentation, to presentation. We are also fortunate to have an amazing group of faculty who were willing to lend their support through guest lectures and assistance with student projects.”