Madhavi Menon didn’t know what psychology was when she was first exposed to it in high school in New Delhi, India, but she knew that she was interested in people. 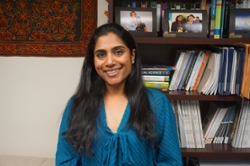 That interest in people started Menon on a journey to earning a Ph.D. and working as an associate professor in the Department of Psychology and Neuroscience at NSU’s College of Psychology. Menon’s interests led her to pursuing a B.A. in Applied Psychology and M.A. in Industrial Psychology at the University of Delhi.

“I would go to the library and just read, and I became interested in adolescent development,” Menon said. “I was more interested in kids and social relationships than corporations.”

Menon said the psychology field of India in the 1990s wasn’t as developed as in the United States, so she and her engineer husband relocated to Florida, where she earned an M.A. and Ph.D. in Developmental Psychology at Florida Atlantic University. Menon worked as a graduate research and teaching assistant and adjunct instructor at FAU before coming to NSU in 2007.

At NSU, Menon has studied parent/child relationships in middle childhood and emerging adulthood. For her research, she collected data from populations in both South Florida and India. Menon and several colleagues worked with the Many Labs Replication Project to examine the replicability of psychology studies. Her most recent paper evaluated parental influence in academic achievement and gender differences. One of the issues she examined was parental monitoring.

Outside of her home life with her husband and two children, Menon started in 2016 the Natya Mārga School of Dance, which focuses on Bharatanatyam classical Indian dance. Menon has trained in dance since a child and also sang on Indian radio. Menon said many of the students, all of whom are Indian, are studying dance as a way to maintain a cultural connection with their homeland.

“Dancing is so much a part of who I am,” she said.