Psychology professor hosts sessions on bullying and suicide in Tampa

One session was at NSU’s Tampa Campus 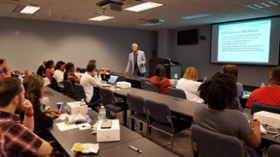 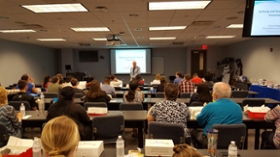 One of the presentations took place at the University Club of Tampa, and the other at Nova Southeastern University’s Tampa Campus. Poland, an expert on school crisis/safety, has made over 1,000 presentations on the subject around the world. Poland’s presentations included a question and answer session with the audience, and many queries were focused on the Netflix series 13 Reasons Why. In the series, a high school student named Hannah Baker commits suicide and leaves behind double-sided cassette tapes explaining the 13 reasons for her suicide.

Poland said that his topic had already been set, but the premiere of the show and the controversy around it caused it to factor into the presentation. According to Poland, the show’s graphic depiction of Hannah’s suicide violated best practices for covering suicide in media. After watching the series, Poland said the recommended minimum viewing age is 16, but there have been reports of children as young as eight watching the show.

In addition to the graphic suicide scene, Poland said the series did not explore mental health. “Suicide is almost always the result of an untreated mental illness,” he said.

Poland also criticized the series for depicting adult characters as clueless or apathetic to the concerns of teenagers, which he said might reinforce the behavior of teens who already feel disinclined to share their problems with adults. He also noted that bullying does not directly lead to suicide.

“We must be aware that while a strong association between bullying and suicide exists, thankfully, a vast majority of bullying victims do not attempt or die by suicide,” he said.

The ubiquity of Netflix and the ability to access it on many devices without parental supervision is a challenge, Poland said.

“Parents don’t always realize that they have a vulnerable child,” he said.

Poland said that students need to be encouraged to share their problems with adults, but also that school personnel need additional training to recognize signs of trouble and understand the show’s impact. As a result of the presentations, Poland said he has been in contact with Hillsborough County Public Schools, which includes Tampa. The school district is in the process of revising its guidelines for dealing with suicide.

Poland teaches in the college's School Psychology and M.S. in Counseling programs.