A chance encounter with a graduate student started Linda C. Sobell, Ph.D., on the path to a long and rewarding career in psychology.

Sobell is a professor, associate director of clinical training and co-director of the Guided Self-Change Clinic at NSU’s College of Psychology, but she was originally on a course to study medicine at the University of California. She was having trouble in a class on human learning, so a professor recommended turning to a graduate student for help. His name: Mark Sobell.

The two met and talked for about eight or nine hours. By the end of the night, he asked her to marry him. She asked for some time to think about it and later said yes.

“It was a foolish thing that we would say to our children turned out really, really well,” she said.

For his part, Mark Sobell does not remember if he ever actually helped her with her human learning problem. He said that his unusual proposal conflicted with the regular scientific approach that he teaches to students of looking for evidence to test a hypothesis. 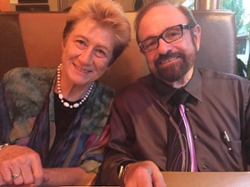 With their personal and professional lives so closely intertwined, the Sobells focused moved to Canada, where they taught and contributed research in the addictions field. The Sobells returned to the U.S. to both teach at NSU. Linda Sobell developed Timeline Followback, a tool that examines an individual’s daily alcohol and drug use. Sobell has studied addiction in multiple forms, including substance abuse and gambling.

Over four decades, Sobell has published more than 300 articles and co-authored nine books, including Group Therapy for Substance Abuse Disorders (2011).

Sobell said research is one of her passions.

“It’s exciting to develop and evaluate new ways of thinking about problems,” she said. “I love doing a study and writing it up.”

Sobell regularly works with students in the Guided Self-Change program who are studying to be clinicians.

“You’re teaching young people ways of working with people,” Sobell said. “It’s a full year to watch them struggle and then fly on their own.”

Working in the clinic has been an invaluable learning experience, said psychology trainee and clinic coordinator Mary Stevens-Carr. Her work includes screening potential clients, answering questions and assisting with student training. Stevens-Carr said she was familiar with Sobell’s work and cited it for a paper on drinking while at Georgia Tech.

“I love working here,” she said. “The Sobells are a brilliant team. Linda has the clinical side, and Mark is good with theory.”

Recently, Sobell said she has been placing a greater focus on health, and that is reflected in the clinic’s Healthy Lifestyles offerings, which include an insomnia program and methods for patients to evaluate their lifestyle choices and guide their own change.

Sobell has worked on multiple grants over the years, and her work has been recognized multiple times, including the Jellinek Memorial Award and the President’s Distinguished Professor Award of Excellence, both in 2014. At the American Psychological Association 2016 convention, Sobell received an award from APA Division 50 Society of Addiction Psychology, an honor also previously awarded to Mark Sobell.

“It’s always nice to be honored by your colleagues,” she said. 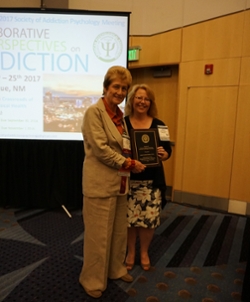 Although the lines between work and home life are blurred for the Sobells, it has its advantages.

“We collaborate on things, and it’s not that someone’s tagging along because we’ve always been full partners,” Mark Sobell said. “If someone is up at 1 a.m. and working, one of us is not going to tell the other to put it down.”