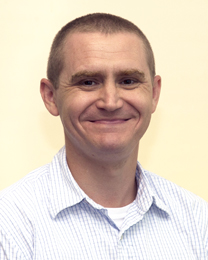 Senior biology major and Honors student Caitlin McCoy grew up with dogs at her family home in Massachusetts. While a student at NSU, she has temporarily cared for foster dogs in need of homes. When pictures of therapy dogs visiting college campuses began popping up on social media, McCoy envisioned an idea for a research project. She sought advice from Jonathan Banks, Ph.D., assistant professor at the College of Psychology, whose area of expertise includes the effect of stress on cognitive function.

Together, McCoy and Banks began a yearlong research project aimed at determining if student interaction with therapy dogs had an effect on the students’ level of perceived stress, state anxiety, and sustained attention.

The results: Students in the dog-interaction group had lower levels of perceived stress and anxiety, and students who also interacted with dogs in their own homes reported the lowest stress levels. However, there was no significant improvement in cognitive function.

“There was a significant effect of canine interaction on perceived stress,” Banks said. “Even with a small sample, we still found a relatively large effect on this reduction of stress and anxiety.”

“Humans have selectively bred dogs to be valuable companions, so it makes sense that we would be less stressed and have less anxiety interacting with dogs during a stressful situation,” said McCoy, who plans to present the study at NSU’s 2016 Undergraduate Student Symposium.

Last fall, during exam week, 29 students participating in the study (as well as students not involved in the study) petted and played with a group of tail-wagging dogs in a grassy area outside the Don Taft University Center. Another 27 students were part of a control group that did not interact with the dogs.

The dogs included golden retrievers, a German shepherd, a beagle, and a Havanese who were brought to campus by Canine Assisted Therapy, a nonprofit organization that provides certified pets for therapeutic purposes in places like nursing homes and hospitals.

Afterward, both groups of students completed measures of stress, anxiety, and sustained attention in the laboratory. A speed-processing task measured how quickly students could process simple information such as looking at a string of letters and identifying which two matched, or determining if two letters were the same.

“One of the thing we asked [in a baseline questionnaire] was how the students were feeling at the moment, to see if there were any changes,” McCoy said.

Previous studies have shown that people who own dogs report higher levels of social support and psychological health, which is one of the reasons “there’s a lot of work with therapy dogs and individuals in nursing homes and other health care environments,” Banks said.

The use of therapy dogs on college campuses has grown dramatically in the last decade with studies showing similarly mixed results, he said. The NSU study was unique in that the interaction between the students and the dogs occurred in a natural, outdoor setting rather than inside a laboratory.

“There have been a few recent studies that looked at the impact of dogs specifically in the lab—where the dog might be sitting next to a student or in their lap,” Banks said. “But there haven’t been any studies framed the way ours was. We were looking at a much more realistic setting. Our participants interacted with the dogs in a manner that would be consistent with what’s actually happening on college campuses.”

In addition, while studies have looked for cognitive changes during an immediate task, research has not examined a possible delayed effect of the dog-related stress reduction on a student’s academic performance, Banks said.

“That might be the next step—to examine whether a reduction in stress has a downstream consequence of improving academic performance,” he said. “In this study, we wanted to see if there were any immediate changes that would suggest that possibility. It’s possible that if we reduce stress, we might see an effect on an exam performance the next day, or just in the overall ability to study. You might not pick up on that effect immediately.”

McCoy believes that fostering dogs helped her cope with the stress of exams. “When I was fostering dogs, I thought it was a great outlet,” she said. “I felt like I was less likely to freak out and get overwhelmed [about exams] because you’re relaxed. You’re thinking, ‘OK, I’m going to take the dog for a walk and take a break’ and mentally check out from your work for a little bit. You come back with an open mind, and then you start over.

“I’d like to see the dogs come back and get a program started at NSU, because I think it’s helpful. I know the students really enjoyed it, and the dogs love interacting. It was a win-win for everybody.

“And I’d love to see more research [in this area],” said McCoy, who plans to take time off after her 2016 graduation and then begin graduate work in NSU’s anesthesiologist assistant program.

Click here to learn more about this research, which was featured in a Miami Herald video.