“Stop, drop, and roll” is a common fire safety instruction for children, but it also formed the basis for the 6th annual TEDxNSU conference, which took place on the main campus in March. 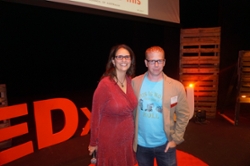 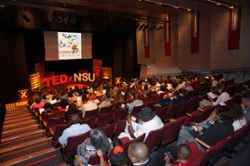 The independently organized conference is run each year by College of Psychology Associate Professors Leanne Boucher and Matthew Collins, both Ph.D.

“We’re on a college campus, so we should be discussing ideas,” Boucher said of the conference’s creation, which started in 2012 with the theme “The Inspiring Brain.”

Collins said ideas for TEDx can come from random inspiration and that “Stop, Drop, and Roll” started as a joke. It evolved from there into the theme of examining the moments in life that cause people to stop and reflect.

“You never know where ideas are going to come from,” he said.

After establishing a theme, Boucher and Collins put out a call for speakers to pitch topics. They determine if a potential speaker’s topic is interesting and relatable, and they work extensively with each individual to refine the topic and rehearse the delivery.

“We get them to give the best 10-minute talk of their life,” Boucher said.

The 2017 event featured eight speakers in the Performance Theatre at the Don Taft University Center. An opening reception before the talks included lunch and live music performed by NSU's Mako Band. 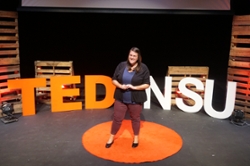 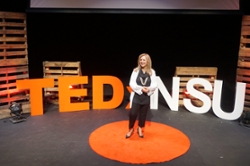 Katie Goodroad opened the show with “Following the Goodroad and Other Great Travel Puns,” which discussed her time studying abroad in France, South Korea, and Tanzania. Goodroad’s lighter take on her topic encouraged people to immerse themselves in other cultures, both locally and abroad.

“It’s important to have a global competency,” she said.

Goodroad works as a graduate assistant in the Razor’s Edge Global Scholars Program and is working towards a master’s degree in College Student Affairs from the College of Arts, Humanities, and Social Sciences (CAHSS).

Speaker Aimee Zadak, Ed.D., is an adjunct professor in the College of Psychology and focused on her experiences growing up as a Cuban exile with the talk “Metanoia: The Reality of Who We Are.” Zadak’s talk focused on culture and identity.

“We have to label someone to feel safe,” she said. “We have to attach culture to everything.” 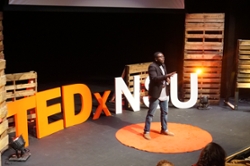 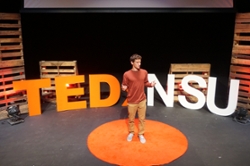 Alonzo Williams took a different approach with his talk “Creative Violence,” which mixed spoken word poetry with a dance routine set to a song that Williams wrote and recorded. A CAHSS Dance major, Williams was inspired to participate by friend and fellow student Stephen Rafferty, a TEDxNSU 2016 presenter.

“I want to use my creativity to create change for minorities,” Williams said.

After completing his degree, Williams intends to pursue a master’s degree in California and hopes to return to NSU in the future to teach dance.

Freshman Nicholas Curci focused on his experiences with bullying at school in “I Am Not a Survivor.” He detailed incidents of both physical and verbal abuse that he experienced.

“I felt like I had a story I wanted to share that could impact a lot of people,” he said. “Growing up, I didn’t have someone to teach me things that are hard to learn and be a role model.”

Other talks included Pratik Patel's "How to Perceive Failure in Life," Yolana Flournah-Perkins' "Putting Out the Fire," Amy Daumit's "Rolling With the Punches: Be the Change That Knocks Out Domestic Violence" and Rosie Taylor's "Failing Forward."

With the 2017 event behind them, Boucher and Collins are already considering potential themes for 2018.

For more information on past events, visit www.nova.edu/tedxnsu.