Does chewing gum help improve short-term memory? The answer was part of many projects featured in an undergraduate poster conference hosted by the College of Psychology.

The research posters were the result of group work conducted by undergraduate students enrolled in PSYC 1020 Introduction to Psychology during the Fall 2017 semester. Associate Professor Matthew Collins, Ph.D., of the Department of Psychology and Neuroscience, designed the poster conference as an expanded version of a project students worked on in his class the prior year. That first time, students gave research presentations in front of their classmates. This time, Collins expanded the idea to a poster conference in the Carl DeSantis Building’s atrium that includes students in the sections taught by Associate Professors Leanne Boucher, Ph.D. and Tim Razza, Psy.D. 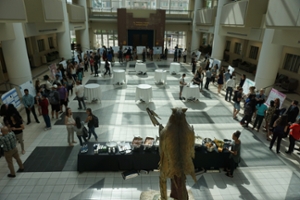 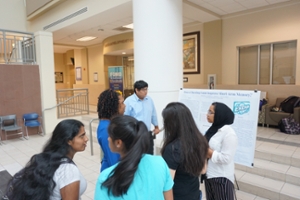 “I wanted to get more faculty involved and make this part of the Intro course,” Collins said.

For this project, students in each class were divided up into groups of two to five. The groups submitted their proposals with four questions to study, followed by a literature review of five peer-reviewed articles on their topic. This was followed by a methods proposal, data collection, analysis submission and a poster draft. Between each stage of the process, Collins, Boucher, and Razza provided their students with extensive feedback. The feedback included providing a template for formatting the poster layout, plus how to dress professionally for the conference and talk about their research.

“It’s a controlled way to show what research is about, and you get more interaction with the students,” Collins said.

The project accounted for 30 percent of each student’s overall grade in the course. Collins said he’s heard anecdotally from some students that participating in the research project has made them interested in changing majors or picking up a psychology minor. He said there are plans to conduct surveys and gather objective data on what students learned and how interested they are in taking future psychology courses. 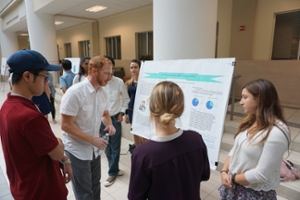 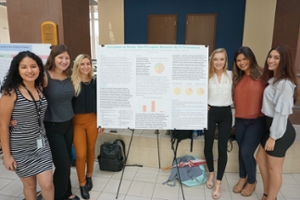 Collins hopes that the poster conference can continue to grow and in the future become a permanent part of the Introduction to Psychology curriculum.

Out of the 22 posters featured in the conference, Collins said the most surprising results came from the gum chewing project.

“They actually found significant results that chewing the mint gum improved people’s memory for a list of 10 words,” he said. “I never would’ve expected that with such a small sample or small number of words, but it was really fascinating that they found this difference in chewing different types of gum.”